There are several Obama facts websites floating around the internet, but few of them address the sincere questions that people may have about the current President.
Most internet advertisements about Obama lead to false, misleading websites created by republicans.

1. Obama is not bitter, but he understand that you just might be a tiny bit bitter if you lose your job to China.

2. Barack Obama invented Open Source software with the help of the guys who started ARPAnet.

3. Barack really believes that over a million people would give money to a smart black guy running for president. Like that would ever happen.

6. It seems that Barack Obama does not utilize the art of old-skool politics, and does not use slash and burn tactics.

7. The creator of Final Fantasy VII originally wanted to name Sephiroth "Barack Obama", but they realized Sephiroth was too evil for it to work.

8. Sometimes when playing Halo 3, Barack Obama switches places with your character - this usually happens when you nearly die in a battle, but somehow come out on top.

9. Obama once attempted to download the paid version of Napster, but somehow Ares was developed instead. 10. The University of Chicago once did an experiment. They put Barack Obama next to a solar panel and told a funny joke. As Obama laughed, his teeth reflected the sun onto the panel, which generated enough electricity to power the university for a week.

13. Some people think it is not a coincidence that Barack Obama rhymes with Dalia Lama.

14. The first time Obama said "Yes We Can", sales of canned foods doubled the next morning: Campbells was very happy. 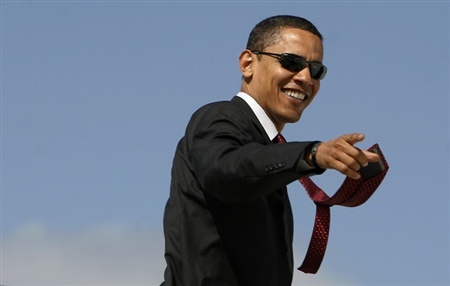